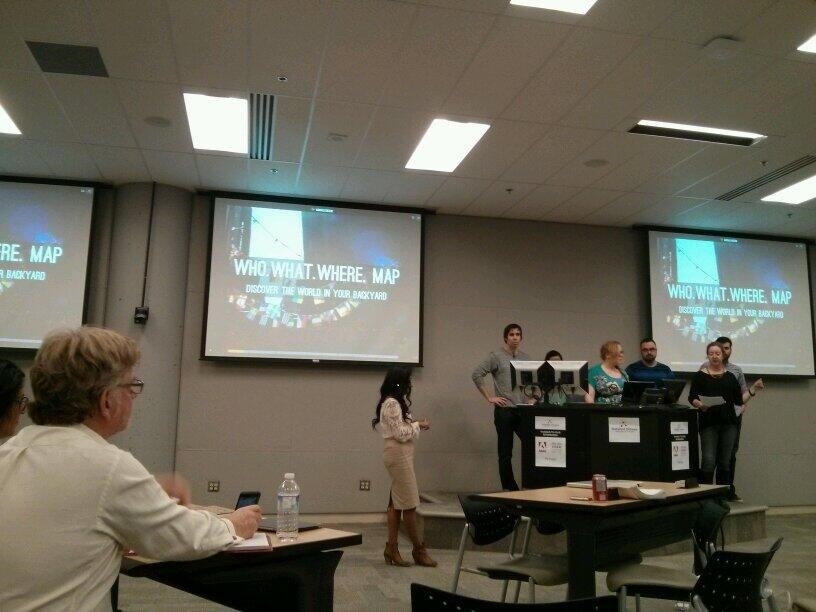 “I really liked the energy, the collaborative atmosphere and the topic.”

“As a non-technological person, I was fascinated by the work being done behind the scenes for all the apps and websites we use. I am now able to understand the logic used to develop codes and it will facilitate communication with programmers and web developers in the future.”

“One of the things I liked best was the diversity of skill-sets and interests, and the way the collaboration worked out. Great teamwork, great results.”

The goal was unusual but simple: bring diverse thinkers and doers together to build a new conversation about migration and technology. The vehicle was Hacking Migration in the Capital, what may have been Canada’s first hackathon on migration issues. The result was an exciting day of collaboration, learning, exploration – and cupcakes. Lots of cupcakes.

But let’s start at the beginning. Many newcomers build successful new lives in Canada through hard work and commitment to their new home. They encounter countless challenges before, during and after their migration experience, everything from finding the right destination, to finding a job, to learning a language. For most immigrants, this process of movement and settlement is so all-consuming, there’s little time to consider a better, easier way.

At the same time, the settlement sector – the people who help immigrants find language classes, jobs, housing and health care – is mandated to provide services. They have limited time and money to develop alternatives or innovative approaches. Some of the best ideas on improving settlement never make it past the “What if” stage, especially the ones involving new technology. Settlement experts and technology exist in mostly separate worlds, with few spaces to bring them together.

Inspired by movements around the world, we decided to see if we could change that. We heard about Refugees United, a Danish NGO that develops software tools to help refugees reconnect with their family members. We read about the philosophy behind Migrahack, an organization that brings American journalists and community members together with programmers to see what they can create with immigration data. And we learned about the power of hackathons fromAmericas Datafest, a migration-themed event held simultaneously in 22 countries.

With the support of sponsors Adobe Canada, Cisco Canada and Pythian, our first hackathon took place over two days in April, 2014. More than 40 people from diverse backgrounds came to explore challenges such as information delivery, community connections and demographics. The range of backgrounds in the room was promising: we had immigrants and non-immigrants, programmers, actuaries, PhD candidates, journalists, students, community organizers, web designers and open data advocates.

Most everyone was taking a leap of faith – many had never been to anything like a hackathon, others had never paused to think about immigration, and few knew anyone else in the room. But they left with new connections and new ideas.

We had migration experts bring 10 problems they wanted to work on, and provided time at the beginning of the day to make their pitches. Then everyone had a chance to circulate, ask questions and decide which problem they wanted to work on. Teams were formed, desks were moved and white boards quickly filled up with the colourful lines and patterns of brainstorming. Teams talked, sparred, conceptualized, designed and coded for the remainder of the first day and most of the second.

We offered a workshop to give non-tech participants a chance to learn something while their teammates were busy coding. How To Talk To Programmers was supposed to last half an hour, but almost two hours later, the session was still going strong, fuelled by eager learners making the most of the opportunity to discover what goes on behind the scenes in web design, programming and open data.

We also provided delicious food to fuel the hard work, including samosas and a cupcake-decorating station. (Following our theme of experimentation and diversity, one participant decorated his samosa with icing and sprinkles.)

In the end, the five teams tackled distinct challenges in unique ways. One team used a newly released local database to build a web tool for employers to explore the demographics of their neighbourhood. Another team built a web site to provide health and legal information to migrant workers. A third team developed the conceptual thinking for calculating what services immigrants receive compared to what they contribute in taxes. Yet another team explored ways to create a buddy network for newcomers, and a fifth team developed an interactive graphic showing the changing face of Canada’s ethnic composition over the past century.

When we asked participants what they enjoyed about the weekend, the answer was clear: collaborating with people from different backgrounds, with different skill sets, on an important topic. Datafest Ottawa is committed to continuing that conversation – cupcakes included.